Are Impossible Burgers and Beyond Burgers Healthy?

Home » Eat Empowered » Are Impossible Burgers and Beyond Burgers Healthy?

Keri Says: The short answer is that eating an Impossible Burger or a Beyond Burger may be a better choice compared to eating a beef burger made from a cow living in a commodity feedlot. But both are processed, packaged foods, and I don’t recommend eating them on a regular basis.

These faux burgers represent a totally different phenomenon compared to companies and chefs that have been trying to make great veggie burgers from whole, fresh vegetables for a long time.

Impossible Burgers and Beyond Burgers: The Nutrition Facts

From a numbers perspective, both of these burgers look pretty good. The patties come in at under 300 calories and contain about 20 grams of protein, which is comparable to a beef burger. They also both deliver important vitamins and minerals. The one caveat is that each burger contains almost 400g of sodium, which could be up to four times what you’ll get in a beef burger (although you may shake salt onto it!).

So, that all sounds fine, but here’s where things get tricky: the ingredient lists.

As you can see, it’s a long list. Let’s start with the main ingredient: soy protein concentrate. I agree with the company that soybeans are inherently healthy, but this is not the same thing as smushing some soybeans into a patty. Soy protein concentrate is heavily processed, which means your body processes it differently and many of the components of the raw food are lost. For instance, soybeans naturally contain lots of micronutrients, but you’ll notice that Impossible had to fortify the burger with vitamins and minerals. Also, the burger is made from genetically-modified soy, and the ingredient that makes the burger “bleed” (which the FDA has approved as safe) is made using a genetically engineered yeast, which you should know if you prefer to avoid GMOs.

Impossible also says they screen the soy for pesticide residue and that it doesn’t contain any, except a non-profit recently tested the burgers and found they contained glyphosate, a known carcinogen associated with increased cancer risk. (The level detected is considered safe by the EPA, but I still don’t like it.) From an environmental perspective, GMO soybeans are grown in extractive agricultural systems that are heavily dependent on chemical use. Glyphosate doesn’t only end up in the final food, it also pollutes soil and waterways.

The list looks pretty similar to the Impossible Burger, right, with the main difference being the protein source is pea instead of soy. It’s still an isolate, so the processing issue applies in the same way. And “natural flavor” is one of those ingredients that’s a total mystery. Beyond doesn’t use organic ingredients, either, but it is non-GMO.

Okay, if I’m choosing between the two, I’d choose Beyond Meat to avoid the whole soy-glyphosate issue.

Overall, are these burgers better for your health and the environment than commodity beef burgers (AKA a typical fast food or frozen grocery store burger)? Probably. That’s because raising cows in massive grain feedlots results in beef that contains unhealthy fats, extra hormones and antibiotics and leads to disastrous environmental issues. (Cows that eat grain also just use a lot of resources up.) So if the choice is between beef or Beyond Meat at Carl’s Jr., I’d choose Beyond Meat.

But you can probably guess my caveat: I’d rather you didn’t eat at Carl’s Jr!

Too much meat is bad for your health and the planet, but I support eating a little bit of good meat if it works for your body, lifestyle and values. I’d recommend only eating burgers once in a while, and when you do, buying organic, grass-fed beef and serving those patties alongside fresh, unprocessed vegetables in the form of a corn-tomato salad and a crunchy slaw. That sounds more delicious than “methylcellulose,” right? 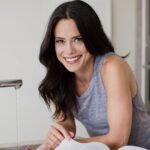