Ever heard the phrase “good mood food?” It’s a real thing. Science suggests that what we eat has the power to seriously influence our mental health, for better or for worse.

Here’s a quick rundown: nutrient dense whole foods (think: fruits, veggies, fish and spices) can help drive down the chronic inflammation that’s associated with depression (and a whole host of other diseases and conditions). Pro-inflammatory eats like sugar-sweetened beverages, refined carbs, processed foods and alcohol (sorry, we said it) may exacerbate the uncomfy feelings that flow from anxiety and depression.

Want the full scoop? Here are seven foods that may help you eat your way to calm.

Depression isn’t currently classified as an inflammatory condition, but research suggests that there’s a likely association between chronic inflammation and major depressive disorder, or MDD.

One of the best ways to flood the system with anti-inflammatory compounds? Befriend berries. Fruits like blueberries and blackberries contain pigments called anthocyanins that act as antioxidants in the body.

Friendly reminder: antioxidants scavenge harmful compounds roaming around our systems, reduce oxidative stress and fight the very inflammation that may contribute to the blues.

Opt for fresh or frozen berries in your smoothies, oatmeal, or straight up as a snack. Pro tip: go for organic if your budget allows. Conventional strawberries are one of the most contaminated items in the supermarket when it comes to pesky pesticide residue.  Wild blueberries contain even more antioxidants than traditional blueberries and even though they may be difficult to find fresh, they’re easily found in the freezer section of most grocery stores.

Studies show that a Mediterranean-style diet rich in fruits, veggies, whole grains, olive oil, nuts and seeds and lean proteins like fish is associated with a lower risk of depression.

Olive oil in particular may reduce inflammation thanks to its potent polyphenols, compounds found in plants that exert antioxidant activity in the body. One compound in particular, called oleocanthal, might even act like ibuprofen to drive down inflammation.

Drizzle some EVOO over your favorite salad or roasted veggies, enjoy it with sliced tomatoes on a slice of grilled bread or stir it into your go-to soup. Note: you can certainly cook with olive oil, but it does have a low smoke point. The best way to maximize the antioxidant benefits is to use it cold (as in salad dressings) versus cooking at high temps.

Much like olive oil, fish is a mainstay of the feel-good Mediterranean diet. In fact, fish oil supplements like EPA and DHA have been studied for their role in improving symptoms of depression.

Before you load up on vitamins though, make an effort to meet the weekly recommendations for fish. Go for at least two four-ounce servings of fish each week. Good low-mercury options include wild salmon, cod, sardines, mackerel and shrimp.

There’s a reason they say the gut is our second brain. Not only are the bacteria in the intestines in constant communication with the brain, they’re also responsible for producing critical neurotransmitters. Example A: about 95 percent of the mood-stabilizing neurotransmitter serotonin is produced in the gut.

A higher concentration of beneficial bacteria (like those in the Lactobacillus family) in the gut microbiome has also been linked to lower levels of stress and anxiety.

For the most gut-brain benefits, prioritize the two P’s: probiotics and prebiotic foods. Eat fermented foods like yogurt, sauerkraut, kefir, kimchi, tempeh or sourdough daily for a dose of probiotics. Be sure to include prebiotic foods too—they support the proliferation of those good gut bugs. Prebiotic foods include beans, oats, Jerusalem artichokes, garlic, onion, apples and just under ripe bananas.

Think of spices as small but mighty mood supporters. Ultra rich in antioxidants, dried spices like turmeric may help fight the blues thanks to its anti-inflammatory activity. Curcumin, the active compound in turmeric, in particular has been studied for its potential role as a complementary therapy for depression.

Up your turmeric intake by sprinkling it on roasted veggies pre-bake, whipping up a turmeric latte, adding it to a plant-based curry or stirring a small amount into your oatmeal for a glowing bowl of goodness. Just beware: the spice stains in a serious way.

Everyone points to the Thanksgiving turkey as the primary source of the amino acid tryptophan. In reality, most proteins are solid sources of tryptophan, which is a precursor for serotonin. The key, however, is to eat a small amount of lean protein with a source of good-for-you carbohydrates. The presence of carbs triggers the release of insulin, which helps to promote tryptophan uptake in the brain and in turn revs up serotonin production. Cue the calm.

Pick lean proteins that are lower in saturated fat, but still satiating. Need some recipe inspo? These curry carrot turkey burgers and this roasted salmon with pistachio arugula pesto are two of our faves. Pair them with a sweet potato or brown rice for optimal serotonin production.

Yep, you read that right. Dark chocolate is rich in magnesium, a key mineral known for its ability to promote relaxation. Choose choc that’s 70 percent cocoa or higher and keep your serving size in check to avoid overdoing it on added sugar (which can have the opposite effect on our mental state).

Looking for other ways to maximize your magnesium consumption? Black beans, avocado, cashews and spinach are all good-for-you foods that deliver the mineral. 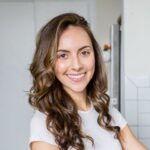 Anthea Levi, MS, RD, is a Brooklyn-based registered dietitian and health reporter. She currently works in private practice at Culina Health and contributes to various media outlets, including Livestrong.com and Nutritious Life. There are many authentic Mexican dishes that have become staples for Cinco de Mayo celebrations in the U.S. From homemade...