He’s been called “one of the unlikely rock stars of the American food scene” by The New York Times and dubbed “the Johnny Appleseed of fermentation” by fellow bestselling author and cook Michael Pollan. For his part, Sandor Katz considers himself a “fermentation revivalist,” a humble but accurate framing.

Over the course of two decades of publishing and teaching, he’s traveled the world, continually learning more about the ways different people transform food by harnessing their local cultures. (And by cultures, we mean microorganisms, not arts and society.) Katz then distills that knowledge into more books and more hands-on workshops, sharing fermentation information and skills with a low-key enthusiastic charm.

The results of his years of travel have accumulated into a delectable new book, “Fermentation Journeys” (Chelsea Green Publishing, $35). Part cookbook, part travel memoir, part food history, Journeys includes recipes for everything from home-brewed sake to Colombian hot chocolate to Nigerian spinach stew. He recently spoke to Nutritious Life about his book, his travels and the art of fermentation. RELATED: Superfood Alert: Why We Love Sauerkraut and Why You Should Too

Chatting With Sandor Katz AKA Sandorkraut

Nutritious Life: Tell me about the dawning of your fermentation practice. You grew up in New York City. When you moved to rural Tennessee at age 30, that’s when you began gardening, which led to fermenting, yes?

Sandor Katz: In my mid-20s in New York, I followed a macrobiotic diet, and that’s when I realized there were digestive and health benefits to these foods. But it was moving to Tennessee and having a garden that gave me reason to investigate how to do it myself.

How did that lead to your becoming an expert who travels the world?

Well, it was a very slow and circuitous process. [chuckles] At first, it was basically just a personal obsession that I shared with friends. I started to get a reputation; friends started calling me “Sandorkraut” because I was always showing up to events with sauerkraut or other things I was making. Eventually, I got invited to teach a sauerkraut-making workshop at a food skill-share event in 1998. (You can watch a handy how-to video of Katz making sauerkraut on YouTube.) That was very illuminating, really, because I learned that many people project generalized anxiety about bacteria onto the idea of fermentation. Trying to answer people’s questions forced me to do some research and actually understand the mystified process, so I could explain to people what makes it so safe. It turned out: I love teaching about fermentation.

That ultimately spurred you to write your recipes down into a ’zine and ultimately your first book.

In a way my Wild Fermentation book tour across the country from 2003 never ended. It transitioned into a life as an itinerant fermentation educator. Teaching and traveling were key to me learning more. When I traveled abroad, I’d be introduced to new foods and beverages. Meeting people from every part of the world, I’d learn a lot of things I didn’t know. I’d hear about what people’s grandparents used to do. Really, my education has been enhanced a thousandfold by talking to so many people about fermentation.

In your book, you tell a neat story about traveling in Africa just out of college, and how you discovered palm wine, made from the sap of palm trees. How did that experience inform your approach to fermentation years later?

After I got into fermentation, I started looking at books about home beer- and wine-making. The literature was very technical. It generally involves using chemicals to sterilize everything, and all this specialized equipment. All of it was interesting—and a bit intimidating. It forced me to remember these things we’d tried in Africa: palm wine, millet beer, date wine, often in remote villages. I just wondered: Where are they getting their [sterilizing chemicals] and their carboys and airlocks? It made me realize there were older, simpler fermentation methods than the ones featured in the books from the late 20th century. There was a disconnect: I don’t think the people making that wine at home had these chemical tablets and these special yeast strains. What were the lower-tech, more traditional methods? The fact that I had that experience in my youth made me ask questions I wouldn’t have known to ask otherwise.

Fermentation: A Strategy for Food Safety You opened a talk I attended years ago by saying, “Fermentation happens.” In other words: It’s all around us. Can the process ever be bad? When food goes moldy, is that bad fermentation?

Sure, you could say that. Fermentation can definitely go bad. If you ferment cucumbers into pickles, sometimes they’ll just turn soft, like baby mush. Certainly undesirable molds can grow on things. Fermentations need to be monitored, and if you start to develop a bit of aerobic surface growth, it needs to be removed. It’s important to note: Fermentation is a strategy for [food] safety. Yes, it can go “bad,” but usually the things that go wrong are just about texture and flavor, not really about safety. There’s just no documented case histories of food poisoning or illness from fermented vegetables.

For people trying to ferment at home, what are some tips to notice if the process failed, or if the food is off?

Generally, I would recommend fermenting vegetables as a place to start. Part of the reason is: It’s pretty straightforward and simple; you don’t need any starter cultures; everything you need is on the vegetables. But also, fermented vegetables are as safe as food gets. Which isn’t to say that nothing can go wrong, but there’s no danger to it. The things that can go wrong will be abundantly visible and not dangerous.

Fermentation is all about manipulating environments to simultaneously encourage the growth of certain organisms, and simultaneously discourage the growth of other organisms.
When you’re fermenting vegetables, that environmental condition is: You want to get them submerged under brine. That protects them from the flow of oxygen and knocks out most of the things that could go wrong. But the surface is generally still in contact with oxygen, so what I recommend people do is monitor it regularly.

It’s a very subjective process; some people will prefer a stronger flavor, while some people prefer a more moderate flavor. So taste it at frequent intervals. This is the best way to avoid problems, because you’ll notice them as soon as they’re beginning to develop. Most of the problems will involve some funky growth on the surface; usually, it’s a phenomenon called kahm yeast, which usually can be skimmed off. Nothing to worry about at all. If you neglect that, it can become a hairy white mold — also harmless, but you need to remove it, because the longer it grows, the more it will degrade the flavor and texture.

You were traveling in Australia in early 2020 when COVID-19 lockdowns began. How did this weird pandemic era impact your life?

We flew home before everything shut down in Australia. I had so many travel plans for 2020. I was supposed to go to Peru, Iceland, Taiwan, the Yukon. It all got cancelled, and really, that’s why I had time to write this book. This is a book that I had, in the back of my mind, always wanted to write, but I was too busy traveling. For me, really, the first year of COVID was a gift: to get a chance to focus and write this book. And just to be at home for a year! That was a gift too. But this seems to be the gift that keeps on giving. 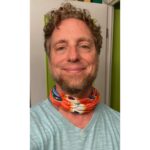